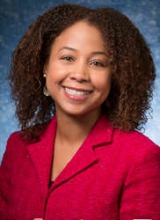 Dr. Varleisha Gibbs is the director of the forthcoming Master’s of occupational therapy program at Wesley College.  The program, the first of its kind in the state of Delaware, is slated to launch during the 2016-2017 academic year.

“We’re excited to have Dr. Gibbs join us here at Wesley College,” said Wesley College Interim Vice President for Academic Affairs Dr. Jeff Gibson.  “She brings with her all the qualities and experience we need to develop a banner OT program to serve Delaware and the entire region.”

Her teaching experience dates back to 2002. As a teaching assistant and adjunct instructor at Columbia and Thomas Jefferson University, her passion for academia developed.  Prior to joining Wesley, Gibbs worked at the University of the Sciences in Philadelphia, where she served as the director of the doctoral programs in occupational therapy. Her responsibilities in that role included ensuring the program met accreditation standards, monitoring the programs so it met the expected outcomes and aiding faculty in developing course syllabi to ensure students received the proper level of learning. She also played an integral role in developing the strategic plans and conduction of self-study processes for the accreditation of the doctoral and master’s programs.

Gibbs has been working in the occupational therapy field since 2002. As an independent contractor, in New York, she serviced a vast range of clientele from early intervention through geriatric populations. In 2004, she founded her own business called Universal Progressive Therapy, Inc. where she served families of the Northern New Jersey communities, managed the budget, developed strategic planning and new programs, and directed various personnel. Gibbs served as president until August 2013 before fully dedicating her time to academia.  She co-authored the book Raising Kids with Sensory Processing Disorders in 2014. In addition, she is a media expert for the American Occupational Therapy Association and expert speaker for Pesi, Inc. Hence, her reach within the field of occupational therapy extends throughout the country.

"The Interim Associate sent by Scott Healy & Associates has been a godsend.  She seamlessly integrated herself into the office, reassuring and inspiring the staff, and creating a welcoming, professional environment.  Since her arrival, our applications and deposits have continued to flow in; we are up on all metrics – increased applications, increased (by 20%) deposits, higher LSATS, higher GPAs.  Our admissions professionals, marketing team, faculty, and student workers really enjoy working with her.  She has also taken on and effectively handled a number of unexpected projects.  During the time she was with us, our faculty approved for immediate marketing four new masters programs and a 2-year accelerated JD, with a January start date.  The Associate and her team had to quickly think through and act on all the admissions-related processes and issues so that we had in place an application system, printed materials, etc.  She made it happen.  She is a real pro who gets results and is a pleasure to work with.  We feel incredibly lucky to have had her help during this period."